skip to main | skip to sidebar

We've been having some big discussions in the Fostermamas house lately. As we look further in relocating one big theme is coming up.

As transracial adoptive parents we have a responsibility beyond typical parenting. I want my kids to be smart, healthy and happy and I want them to be strong black citizens.

As we look into communities we're often judging how racially "diverse" they are. While reading an old post at Antiracistparent I began to delve deeper into my feelings on that subject. Part of the post there quoted:

Barry-Austin recalled a New York Times article from several years ago that looked at South Orange and its racial make-up (Preserving a Delicate Balance by Andrew Jacobs: May 18, 1997.) In it, the author cited the words of Professor Douglas S. Massey, a professor of sociology at the University of Pennsylvania and the author of ”American Apartheid: Segregation and the Making of the Underclass” (Harvard University Press, 1993.) Professor Massey spoke of surveys in which African-Americans respondents describe a neighborhood as ideally integrated when the racial composition is a 50/50 mixture of the two races. To most of the white people surveyed, on the other hand, integration meant more of an 80/20 mixture (heavy on the whites, please.)

How much diversity are we looking for? Is there a number I can put on it? Historically St. Louis' racial census has been 50/50....but that does not mean you can go into any neighborhood and find that diversity. Like many urban cities we are still very segregated. AA communities to the north and Caucasian communities to the south. Our lack of integrated diverse community options had us thinking that maybe we should just look into strong black communities instead.

Then I had to go and watch CNN's Black in America, The Black Woman & Family. One of the interviews was with a Harvard professor who quoted that children in undevoloped countries get a better education than black children in this country. God that makes my heart sink. I know that there is a huge gap in the resources that historically black schools receive compared to white schools. They quoted the drop out rate among black high school students as 50%. FIFTY percent. I don't want my kids to be that statistic. What parent does?

I don't want my kids to struggle, I want to give them every educational opportunity I can. Since my kids all have some special needs I know I'm going have to advocate to make sure that they already get some of the same educational advantages typically developing children receive. We're already seeing how hard that can be in a school district with no funds. (This week we enrolled the girls in the local magnet school that they were accepted in -boy that's another post)

I want to live somewhere where rich white folk pay high taxes so my kids can go to a great school. I want my kids to attend schools where the teachers are highly educated and credentialed. I want schools that have the latest technology and state of the art science labs. Typically that's a white community. Why does that make me feel so uneasy? Am I using racism and white privilege to my advantage instead of fighting the man?

A long time ago I read the book Silver Rights about one family's fight to send their kids to the local white school after the Civil Rights Act of 1964 mandated the desegregation of all public schools. I remember thinking after I read that book that I would make sure that my kids took advantage of every opportunity that they paved the way for.

But as a transracial family it's not that easy.
Posted by Fostermama at 10:59 AM 4 comments:

We're still very interested in cohousing....even more so when you really wish you knew your neighbors well enough that you could leave your 4 yr olds with them while you take your baby to the emergency room.

We visited the local cohousing group that is still in the process of retrofitting buildings. We really liked their eco focus but I don't think it will have enough green space to make me happy. I'm getting tired of living in a sea of concrete.

This weekend we'll be taking a trip to Lawrence KS to visit the cohousing community there.
Posted by Fostermama at 10:12 AM No comments:

Choo Choo had another seizure later that same day and after paging the Pediatric Nuerologist on call for more than twenty minutes we hung up and called our close friend who is a Pediatric Infectious Disease doctor. She was able to calm us down quite a bit and told us to keep an eye out for him getting sick (as that seems to be his trigger) and sure enough a half hour after his 2nd seizure he got a fever of 102.

Our regular pediatrician talked to his Nuerologist and they're upping his dose of Keppra. Hopefully this will mean no more seizures but it also means a lot more cranky-tantrum moments. Keppra makes him so angry. Ever seen an 18 month old hit you like they mean it?
Posted by Fostermama at 10:05 AM No comments:

Choo Choo had another seizure today, very different from his previous ones. He lost consciousness during the seizure. This one is very serious since he had the seizure while on anti-seizure medication.

However no one in Nuerology is calling me back. We have a regularly scheduled appointment next week. Don't these people know I'm going crazy.

I'm regretting selling my pack n play, co-sleeper and baby hammock. Since his last seizures came in a group I want to keep a close eye on him.
Posted by Fostermama at 7:04 PM 1 comment: 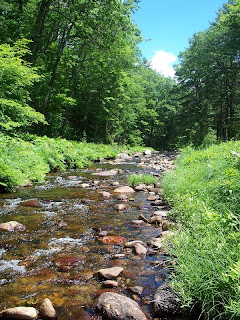 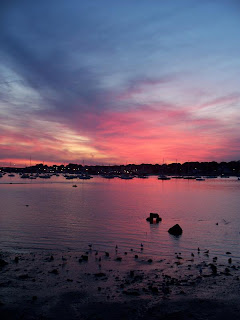 We're back from our veeeerrry long vacation. I think I'm going to need a few days just to recover. Note to self: three weeks is way too long to be away from home with three little ones.

These are two of my favorite pictures from our trip. The first picture is Otter Creek in New Hampshire where we played in the water for a bit to the kids out of the car. The second is sunset over Salem Mass. where we spent a wonderful evening at an old fashioned kiddie amusement park.

New England is one of the most beautiful places in the US. We particularly loved Vermont. The mountains, streams and idyllic farms were breathtaking. For relocation purposes we liked the Burlington VT area out of all the places we visited. It's a small city but if you go 7 miles it's complete farmland. Living with such urban sprawl right now it was amazing to me to see how close city-country life were.

The biggest part of the trip though was how much we fell in love with co-housing. Living in a community where it's very much like the neighborhoods of my childhood is very appealing to me. I really felt like it was what we're always searching for in the city... a strong community where everyone knows each other, watches out for each others kids, participates together beyond yearly block parties and really work to form relationships and be a support system. I think we've shifted our relocation efforts to look specifically for a co-housing community where our Gay-Black-Jewish-Disabled Family would be an asset and a resource to others instead of looking for a place where we "fit".
Of the two co-housing communities we visited one was decidedly more child centered and that is the one that we preferred. I think if Vermont in general and that area specifically were'nt so damn white....we'd be there in a heartbeat.
Posted by Fostermama at 2:20 AM 1 comment: